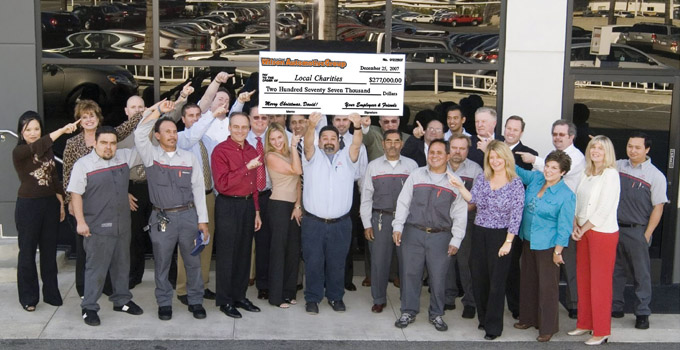 The 1500 employees of the Wilson Automotive Group, which includes Honda Santa Ana and  15 other dealerships,  are giving their boss a Christmas gift he can’t pour over ice, splash on his face, wear or even drive across town. It is a present David Wilson will never forget.

At the company Christmas party on Dec. 9, the employees presented David with a check for $277,000 – representing money they individually & collectively contributed to local charities in his name this holiday season. Recipients included Orangewood Children’s Foundation, Olivecrest, United Cerebral Palsy and the American Cancer Society.

The scope of his employee’s generosity overwhelmed Wilson. “I am a car salesman. I am rarely at a loss for words,” he wrote in a thank-you memo to his associates. “This however, is one of those rare times; and I simply cannot find words to thank you for your generosity.”

In the first few years Wilson owned Toyota of Orange, employees and friends tried to shop and find the perfect gift for a caring and generous boss. A.J. D’Amato Jr. was the general manager of Toyota of Orange, Wilson’s only dealership at that time, and says that “Each and every year we’d try to outdo ourselves. David is such a great man, and everyone wanted to do something special for him. We started running out of ideas.” D’Amato is now Wilson’s partner at Newport Lexus, Tustin Lexus and Weir Canyon Honda and Acura. He and Vikki Murphy, now vice president of the Wilson Automotive Group, came up with the idea of an endowment to Orangewood Children’s Foundation in Wilson’s name. That first year the 130 employees of Toyota of Orange donated $10,000 to the David Wilson Endowment Fund. This fund now contains over $500,000 – and the interest from it funds university scholarships for alumni of Orangewood. It was the foundation’s first endowment gift and Wilson was thrilled.

Since that time, Wilson’s organization has grown to encompass 16 automotive dealerships and employ nearly 2,000 associates. And every year the employees at his dealerships choose this way of thanking their employer at the holiday season. Since the year 2,000 this has amounted to over a million dollars!

What makes this such a rewarding gesture for Wilson is that nearly everyone participates. “This is unbelievable to me! We’re not talking about executives and high-powered stock brokers cashing in on the latest boom. These are salesmen, porters, mechanics, bookkeepers, everyday working people who want to give something back to their community. I am so proud and honored that they would choose to thank me in this way. The dollar amount is staggering – but even more amazing is that we have been able to assemble nearly 2,000 people of such caring and quality into one organization.”

Murphy attributes this quality to Wilson’s leadership. “David has taught us by example. He was always believed in giving back to the communities that have made him successful. We are proud to work for David and the Wilson Automotive Group. And because we have been so blessed, we, too, want to share.” 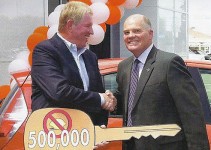 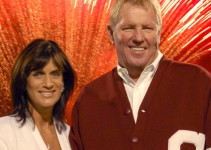 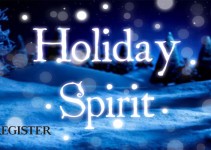